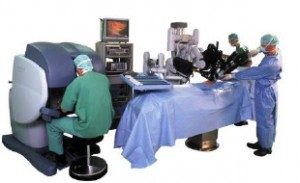 Telemedicine ~ the word conjures a vision of the future, but that future is quickly coming to pass. Literally, “telemedicine” means distance medicine. It is the application of modern technology to medical practice, in order to provide care and services over long distance.
▽
Imagine a surgeon sitting in a major metropolitan medical center, performing a delicate operation on a patient in an operating room hundreds of miles away, using robotic arms and video telecams. It seems a bit exotic to think of it now, perhaps a little sci-fi. But it is being done experimentally. Soon, it may be as everyday as a band-aid on a skinned knee.
▽
Development of telemedicine is going on all over the world. There are various American centers working in this area. In addition, several countries in Europe, including Poland, Ireland, France, Spain, Greece and the United Kingdom have all published studies on their pioneering use of telemedicine. Projects in Africa, India, China and South America are exploring the potential.
▽
And what are some of the applications? The span is wide and growing. Examples include the following. Dermatologists exam rashes, skin cancers and other lesions from miles away. Psychiatrists and psychologists screen patients for mental disorders, and provide counseling. Emergency and trauma nurses and technicians communicate with physicians about accidents, even about major public health emergencies. Kidney dialysis is performed locally, monitored by a nurse at a central hub. Intensive care patients from several hospitals in several regions are attended by a single specialist at a bank of monitors, using computers as well as nurses as his/her eyes, ears and hands. And robot arms perform surgery, directed distantly by the hands of the surgeon.
▽
Right now telemedicine is a challenge. It is a challenge to develop new technology, a challenge to find the resources for these experimental projects in a time of rising health care costs. But as they begin to pay off, the payoff will take several forms. One is that money will probably be saved in the long run. People currently without health care in remote places around the world will get new health care that they would not have been able to hope for. New techniques will be developed. The gains in preventive medicine might be even greater than gains in actual treatment.  We have yet to see the actual shape the future of health care will take. But the promise of telemedicine will certainly allow physicians and other providers to give more care to more people in more remote places, and provide more preventive services, with the possibility of improving the health of the planet in ways that are inconceivable now.
▽
by: Dr. Sam Snyder
___________________________
www.TelehealthJobs.com
www.TeleEd.com
www.AnestaWeb.com

This site uses Akismet to reduce spam. Learn how your comment data is processed.

You may have missed

The Telemedicine Tipping Point Is Here, and Laws Have Changed to Make It Easier to Access

How to Build a Successful Telemedicine Program

Telemedicine and telehealth in the wake of the COVID-19 pandemic.